KDE is happy to announce the immediate availability of version 4.8 of both the Plasma Desktop and Plasma Netbook Workspaces. The Plasma Workspaces have seen improvements to existing functionality, as well as the introduction of significant new features.

The Window Switcher that is commonly assigned to the Alt+Tab shortcut now has six possible layouts. These choices are especially useful for systems that don’t use Desktop Effects. Task Switcher choices can be found at the Window Behavior module inside System Settings. Another round of significant performance improvements in KWin, Plasma’s window manager and compositor further improve the user experience. 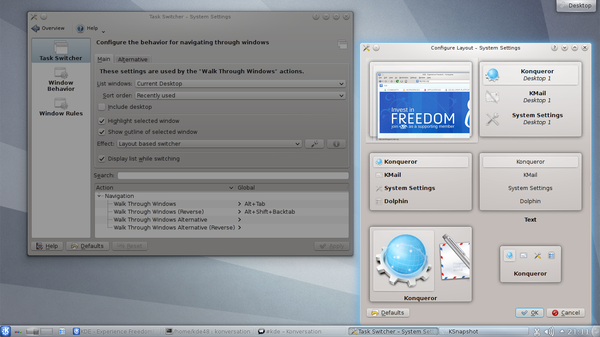 You can choose the layout in Plasma's Alt-Tab window switcher

KDE Power Management System Settings have been redesigned. The user interface has been simplified and the layout improved. Power management no longer relies on user created profiles. Instead, it provides three presets: On AC Power, On Battery and On Low Battery. In addition, power management is now multi-screen aware and adapts to the user's current activity. This means, for example, that power settings can be set to never dim or never turn off the screen in a Photos or Video Activity. If needed, power management can be deactivated quickly via the battery desktop applet. 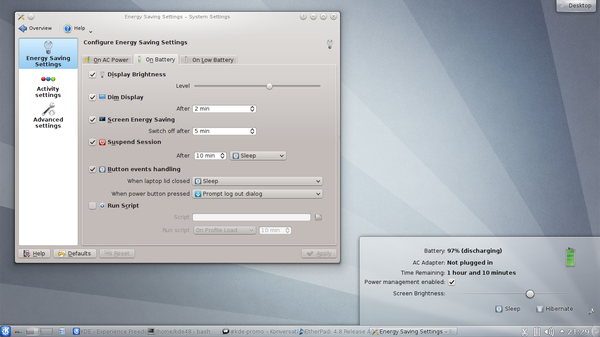 A new splash screen implementation uses QtQuick. This release debuts a visually and feature-wise re-implementation of the device notifier widget as the first default widget of Plasma Desktop that moves to QtQuick for easier maintainability, a smoother user experience and more touch-friendliness. The on-screen keyboard has seen numerous improvements in terms of bug fixes and performance. Taskbars and docks work better thanks to improvements from Craig Drummond's Icon Tasks Plasmoid. This includes nicer context menus, improved support for launchers, and a number of bug fixes. A new picture-of-the-day wallpaper plugin allows new astronomy, flickr, Wikipedia or other picture on your screen every day. Performance improvements, usability fixes round up the overall user experience. 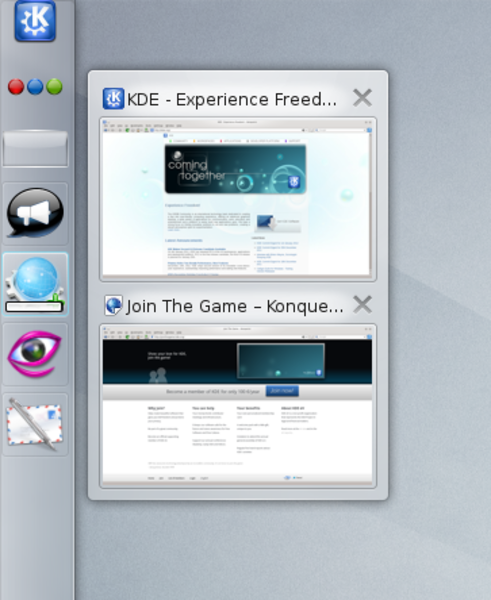 KDE Platform provides the foundation for KDE software. KDE software is more stable than ever before. In addition to stability improvements and bugfixes, Platform 4.8 provides better tools for building fluid and touch-friendly user interfaces, integrates with other systems' password saving mechanisms and lays the base for more powerful interaction with other people using the new KDE Telepathy framework. For full details, read the KDE Platform 4.8 release announcement.