Today KDE announces the immediate availability of the KDE Software Compilation 4.4, "Caikaku", bringing an innovative collection of applications to Free Software users. Major new technologies have been introduced, including social networking and online collaboration features, a new netbook-oriented interface and infrastructural innovations such as the KAuth authentication framework. According to KDE's bug-tracking system, 7293 bugs have been fixed and 1433 new feature requests were implemented. The KDE community would like to thank everybody who has helped to make this release possible. 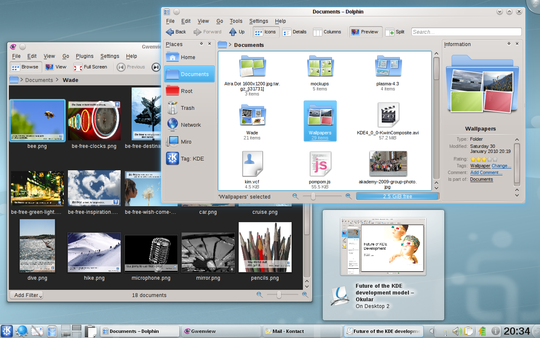 Read the Visual Guide To KDE Software Compilation 4.4 for more details on the improvements in 4.4 or read on for an overview.

The KDE Plasma Workspaces offer the basic functionality a user needs to start and manage applications, files and global settings. The KDE workspace developers deliver a new netbook interface, refined artwork and a better workflow to Plasma. The introduction of social and on-line service features emerge from the cooperative nature of the KDE community as a Free Software team.

The KDE community offers a large number of powerful yet easy to use applications. This release introduces a variety of incremental improvements and some innovative new technologies. 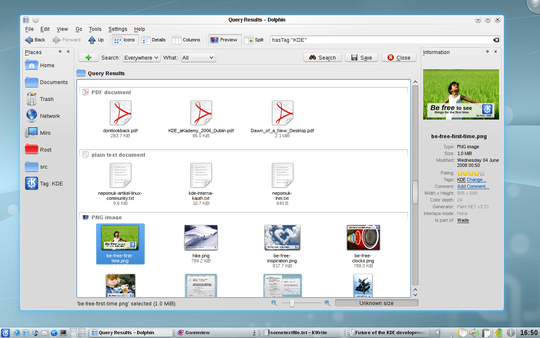 The strong focus on excellent technology in the KDE community has resulted in one of the most complete, consistent and efficient development platforms in existence. The 4.4 release introduces many new collaboration and social network related technologies in the KDE libraries. We provide powerful and flexible, open alternatives to existing technologies. Instead of striving to lock-in users into using our products, we focus on enabling innovation in both the on-line and desktop spaces.

Liberally licensed under the LGPL (allowing for both proprietary and open source development) and cross-platform (Linux, UNIX, Mac and MS Windows).

The Web and Social Networks on the Plasma Desktop

Spread the Word and See What Happens

The KDE Community encourages everybody to spread the word on the Social Web. Submit stories to news sites, use channels like delicious, digg, reddit, twitter, identi.ca. Upload screenshots to services like Facebook, FlickR, ipernity and Picasa and post them to appropriate groups. Create screencasts and upload them to YouTube, Blip.tv, Vimeo and others. Do not forget to tag uploaded material with the tag kde so it is easier for everybody to find the material, and for the KDE team to compile reports of coverage for the KDE SC 4.4 announcement. Help us spreading the word, be part of it!

KDE, including all its libraries and its applications, is available for free under Open Source licenses. KDE software runs on various hardware configurations, operating systems and works with any kind of window manager or desktop environment. Besides Linux and other UNIX based operating systems you can find Microsoft Windows versions of most KDE applications on the KDE on Windows site and Apple Mac OS X versions on the KDE on Mac site. Experimental builds of KDE applications for various mobile platforms like MS Windows Mobile and Symbian can be found on the web but are currently unsupported.
KDE can be obtained in source and various binary formats from http://download.kde.org and can also be obtained on CD-ROM or with any of the major GNU/Linux and UNIX systems shipping today.

Packagers. Some Linux/UNIX OS vendors have kindly provided binary packages of KDE SC 4.4.0 for some versions of their distribution, and in other cases community volunteers have done so.
Some of these binary packages are available for free download from KDE's http://download.kde.org. Additional binary packages, as well as updates to the packages now available, will become available over the coming weeks.

Package Locations. For a current list of available binary packages of which the KDE Project has been informed, please visit the KDE SC 4.4.0 Info Page.

The complete source code for KDE SC 4.4.0 may be freely downloaded. Instructions on compiling and installing KDE SC 4.4.0 are available from the KDE SC 4.4.0 Info Page.