The KDE Community today announces the immediate availability of "Caizen", (a.k.a KDE 4.3), bringing many improvements to the user experience and development platform. KDE 4.3 continues to refine the unique features brought in previous releases while bringing new innovations. With the 4.2 release aimed at the majority of end users, KDE 4.3 offers a more stable and complete product for the home and small office. 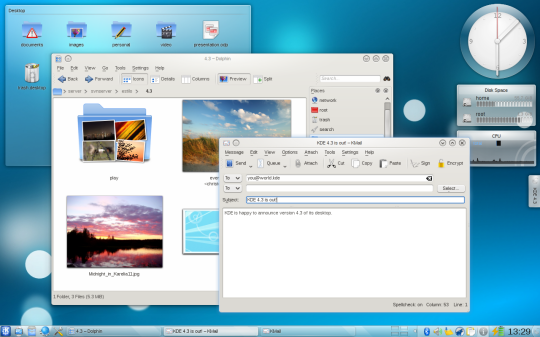 The KDE community has fixed over 10,000 bugs and implemented almost 2,000 feature requests in the last 6 months. Close to 63,000 changes were checked in by a little under 700 contributors. Read on for an overview of the changes in the KDE 4.3 Desktop Workspace, Application Suites and the KDE 4.3 Development Platform.

Below you can find a short list of improvements to the KDE Desktop Workspace. 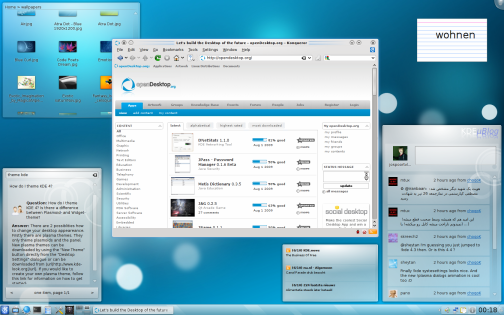 Web integration in KDE 4.3
A screencast featuring some of the above mentioned improvements
Ogg Theora version

A great number of sophisticated applications are provided by the KDE community which take full advantage of the powerful KDE Application Framework. A selection of these applications are included in the KDE Software Distribution, divided up by category into various Application Suites. These include:

Together they form a comprehensive set of desktop essentials that run on most modern operating systems. Below you will find a selection of improvements to some of these Application Suites. 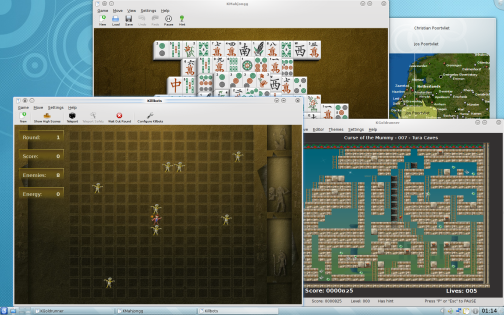 The KDE Application Development Framework helps developers create robust applications efficiently by streamlining the complexity and tedious tasks usually associated with application development. Its use by KDE applications provides a compelling showcase for its flexibility and utility.

Liberally licensed under the LGPL (allowing for both proprietary and open source development) and cross-platform (Linux, UNIX, Mac and MS Windows), it contains among other things a powerful component model (KParts), network transparent data access (KIO) and flexible configuration management. Dozens of useful widgets ranging from file dialogs to font selectors are provided and the framework also offers semantic search integration (Nepomuk), hardware awareness (Solid) and multimedia access (Phonon). Read on for a list of improvements to the KDE Application Development Framework. 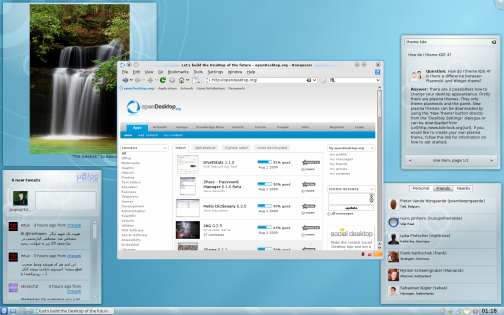 Social desktop and other online services in action

As mentioned, the above is just a selection of the changes and improvements to the KDE Desktop Workspace, KDE Application Suites and KDE Application Development Framework. A more comprehensive yet still incomplete list can be found in the KDE 4.3 feature plan on TechBase. Information about applications developed by the KDE community outside of the KDE Application Suites can be found on KDE family webpage and on the kde-apps website. The Marble developers from the KDE Edu team have released Marble 0.8 with KDE 4.3 and compiled an extended visual changelog on their website.

Spread the Word and See What Happens

The KDE Community encourages everybody to spread the word on the Social Web. Submit stories to news sites, use channels like delicious, digg, reddit, twitter, identi.ca. Upload screenshots to services like Facebook, FlickR, ipernity and Picasa and post them to appropriate groups. Create screencasts and upload them to YouTube, Blip.tv, Vimeo and others. Do not forget to tag uploaded material with the tag kde so it is easier for everybody to find the material, and for the KDE team to compile reports of coverage for the KDE 4.3 announcement. Help us spreading the word, be part of it!

KDE, including all its libraries and its applications, is available for free under Open Source licenses. KDE software runs on various hardware configurations, operating systems and works with any kind of windowmanager or desktop environment. Besides Linux and other UNIX based operating systems you can find Microsoft Windows versions of most KDE applications on the KDE on Windows site and Apple Mac OS X versions on the KDE on Mac site. Experimental builds of KDE applications for various mobile platforms like MS Windows Mobile and Symbian can be found on the web but are currently unsupported.
KDE can be obtained in source and various binary formats from http://download.kde.org and can also be obtained on CD-ROM or with any of the major GNU/Linux and UNIX systems shipping today.

Packagers. Some Linux/UNIX OS vendors have kindly provided binary packages of KDE 4.3.0 for some versions of their distribution, and in other cases community volunteers have done so.
Some of these binary packages are available for free download from KDE's http://download.kde.org. Additional binary packages, as well as updates to the packages now available, will become available over the coming weeks.

Most performance problems with the NVidia binary graphics driver have been resolved in the latest releases of the driver available from NVidia. However due to recent changes in the graphics stack on linux, certain software and hardware configurations might still encounter issues with drawing speed and general slowness. Please contact your distribution vendor or driver developers if you encounter issues.

Package Locations. For a current list of available binary packages of which the KDE Project has been informed, please visit the KDE 4.3.0 Info Page.

The complete source code for KDE 4.3.0 may be freely downloaded. Instructions on compiling and installing KDE 4.3.0 are available from the KDE 4.3.0 Info Page.

* Operating systems and trademarks mentioned on this page are property of their respective owners.