The KDE development platform contains common UI widgets, but also libraries for interaction with hardware, multimedia, configuration and network transparency, among others. Some changes affect most or all the KDE applications. The most notable of these improvements include:

The 'file open' and 'file save' dialogs have been touched up. Using the same infrastructure as Dolphin, they now also include a zoom slider and can show file previews. Sharing such user interface elements ensures a smooth and consistent user experience. 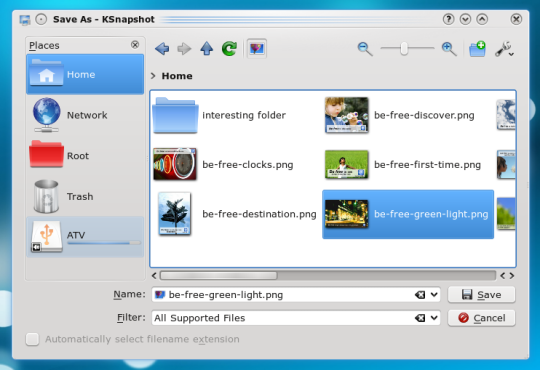 The File Open dialog has been further improved

The Oxygen artwork continues its path of refinement. In Plasma the panel has a new (transparent) look. Window shadows now form a blue highlight around the active window and wobble when you have the wobbly windows effect enabled. Subtle improvements like the new progress bars and scroll bars can be found everywhere, but the new wallpapers are probably most visible. Extending the already very complete collection with some new high quality pieces of art they bring a fresh look to your desktop.

KDE on Windows and Mac

The KDE packages for Windows and Mac are not fully mature yet, but getting better. If you want, you can have a look. You can download the installer from windows.kde.org, choose "Download Installer" from the download section and start the installer. Go through the dialogs by using "Next". It is smart to choose a mirror in the server list close to you to speed up the download of the KDE applications. After that you can choose which KDE release you want - it is advisable to go for either the latest stable or the latest unstable release. Next up will be a list of languages and software you can choose to install. Choose your language by clicking the little box in front of the line, and choose for example kdegraphics and kdeedu. Going further clicking "next" will start downloading and installing the choosen applications and languages. You can now find the KDE applications in a submenu in the Windows Programs menu. Enjoy!

For KDE applications on the Apple Macintosh go to mac.kde.org and download the installer. After you have run the installer, you can find the applications in Applications/KDE4. Be on the lookout for updated packages for the Mac soon!

After Qt will be released under the terms of the LGPL, both the KDE libraries and beneath it Qt are available under those more relaxed licensing terms, making for a more compelling platform for commercial software development.

KDE 4.2 introduces experimental Python bindings support for the Marble widget and related classes. This means it is possible for KDE applications written in Python to make direct use of the Marble widget in their user interface to display an interactive map and to overlay custom information and rendering on top of it.

The KrossFalcon binding provides Kross-enabled KDE applications with a powerful, light and extensive scripting engine, based on The Falcon Programming Language. The time needed to load Falcon scripts, and the fast reflection of QT objects into language variables ensure performance and throughput far above what can be achieved with other scripting engines. The Falcon binding does this without forfeiting the ability to build complex, stand-alone application-grade scripts. Falcon also provides the ability to dynamically load and use other scripts and C libraries, that can thus be seen as plug-ins. You are then fully able to build highly dynamic applications, with a C++/Qt front-end and a flexible and pluggable engine. And while libraries and bindings for Falcon are still few, but growing fast, the language itself has everything you'd expect from a modern scripting language, and much more.

More highlights of the changes in KDE’s development libraries are:

Documentation about many parts of KDE has been added to Techbase. We are still a long way from properly documenting all the new and improved libraries. You can ask for help and information on the IRC channels and mailinglists. When you figured out how something works, it would be greatly appreciated if you could turn this learning experience into documentation for others to ease their learning process! Head on to Techbase and help your fellow programmer.