Learn and Discover with the KDE Educational applications

Desktop Planetarium, KStars, provides an accurate graphical simulation of the night sky, from any location on Earth, at any date and time. It can control telescopes and has many tools for the amateur or professional astronomer. This new version now shows millions of stars, can predict conjunctions and has a Sky Calendar. If you start it for the first time, a welcome wizard will show. After choosing your location, you can click the "Download Extra Data..." to select additional star and image data to install. Millions of stars are available in the packages, as well as inline thumbnail images which show images of objects right on the sky. There are several interesting educational applications of this program as well. Pushing "CTRL-F" will bring up the find dialog. Type a name of a heavenly object to find it, like the moon. You might want to turn off "Toggle opaque ground" (most right button on the toolbar) to see the object if it is below the horizon. If you now choose "Equatorial coordinates" by hitting the space bar and set the time per second in the toolbar to 1 hour, watch. The moon moves - but, seen from the equitorial, not in a horizontal line! Why is that? The reason is that the earth spins, but not entirely as you might expect: there is a tilt and a wobble to the spin of the earth, and thus the observer moves up and down... Making science visible to children in such a way is a strong tool in the classroom, and this is a truly educational application. And it is not just for children, so be sure to have a look at this application if you are interested in astronomy! 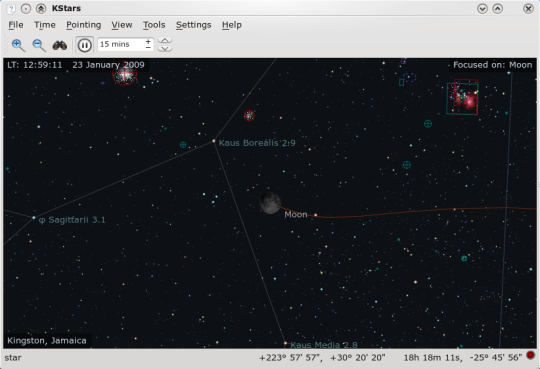 KStars is KDE's desktop planetarium, you can even control your telescope using it

KBruch can be used to practice with fractions. Kpercentage functions have been merged with KBruch so you can now also practice with percentages. KAlgebra offers more complex mathematical functionality, even going as far as supporting the MathML language used in professional circles. 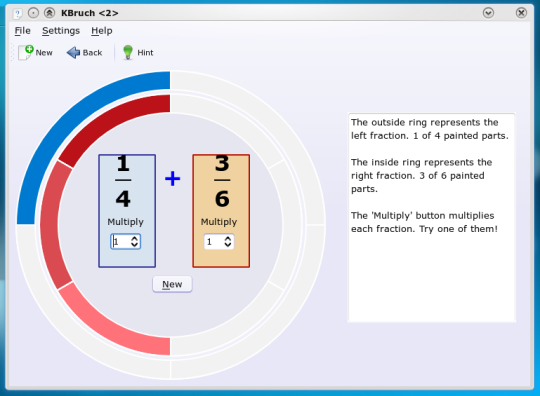 Parley, the application which helps you learn other languages, has become easier to use and can fetch translations automatically from online sources. KTurtle became more fun as you can now export images and use a simple color picker to change colors. 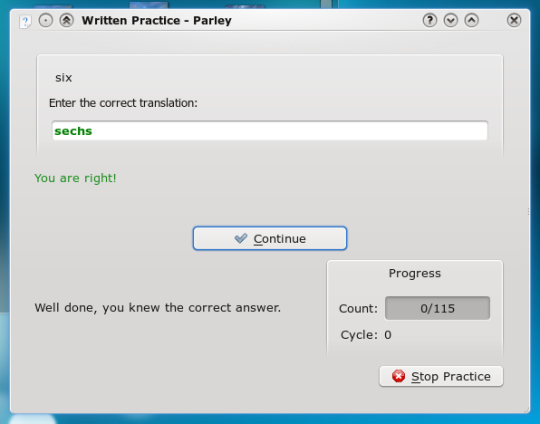 Viewing celestial bodies up close is now possible with Marble, the desktop globe. Besides the Earth there are now maps for the Moon and Mars. You can view the several Moon landing sites (including the impact location of the recent Indian mission). On Mars you can see the spots where the Mars Exploration Missions have taken place. If you want to have a look around these remote places, start Marble either using "ALT-F2" (type "marble" and hit enter) or find it in the menu. Marble might generate the maps first, and will then show you the Earth. You can use the controls on the screen or the mousewheel to zoom in and out, and by clicking and draging you can turn the globe around. Click "Map View" on the bottom left to select another map. Besides the "Atlas" and "Satelite View", there is an "OpenStreetMap" view which uses road data from the volunteer-driven Open Street Map Project. It will download data from their servers to show you the maps up close. You can also find a map of the world from 1689. To get the map of Mars, you have to install a new map. This is easy using the build-in GNX interface. Go to the "File" menu and choose "Maps". Look for the Mars map, either by using the search function or scrolling the list, and click the "Install" button on the right side. Marble will download and install the map. If you want, you can choose to install other maps, or close the window. Now you will find the Mars map among the selection of maps on the left side of the screen. Just click it, Marble will load it and you can have a look around. To find out more about what's new in Marble, have a look at the visual changelog to version 0.7.

The KDE Games provide you with a bit of enjoyment during a day of hard work. The KDE Games team has been working on new and improved artwork and introduced three new games: Killbots, Bomber and Kapman. In Killbots, your goal is to make sure the robots don't get to you. You can move away from them, but if they close in on you, there is the possibility of jumping away. Be careful with that, as you need energy to jump safely to another location. You can 'earn' energy by waiting out a round - do so if you're sure the robots won't catch you even if you can't move anymore. 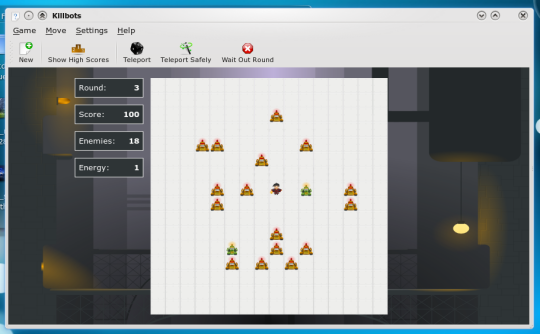 Escape from the Robots in Killbots

In Bomber your goal is to destroy the buildings below you before you crash into them. You use the spacebar to drop a bomb. The space ship will fly over the buildings, getting lower each time. Once a level is cleared, a new, more difficult one starts with taller buildings and a faster plane. 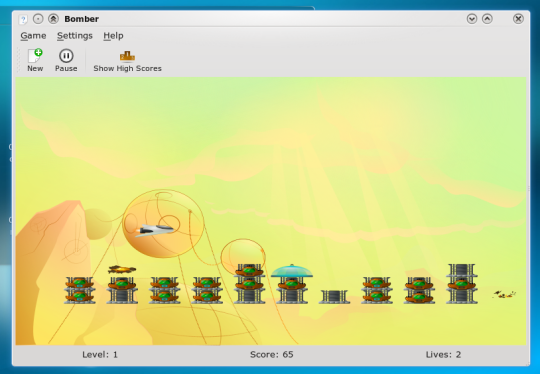 Avoid crashing your aircraft into buildings in Bomber
Kapman is the very entertaining KDE version of the famous Pac-Man game. Kapman was created by a group of French students as part of their courses in Computer Science at the IUP ISI - University of Toulouse. 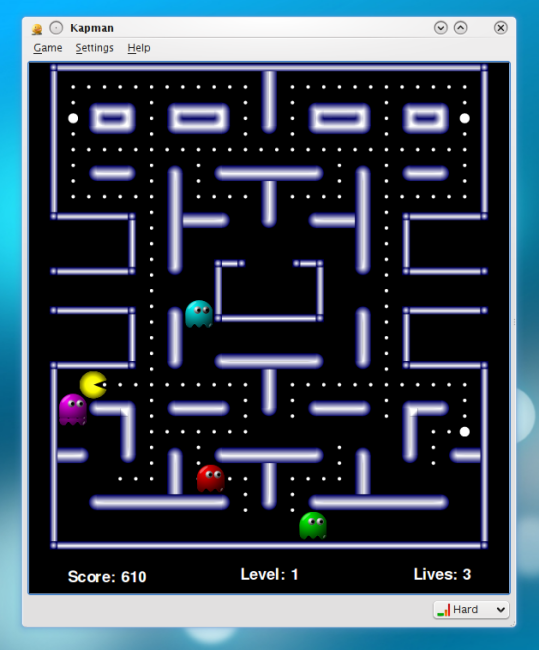 KDiamond is a single player puzzle game. The goal is to build lines of three similar gems by moving them with the mouse. Once you've got three in a row, they disappear and new jewels will appear on the board. You can now move with drag and drop, and turn off the game timer. The sound effects are also new. 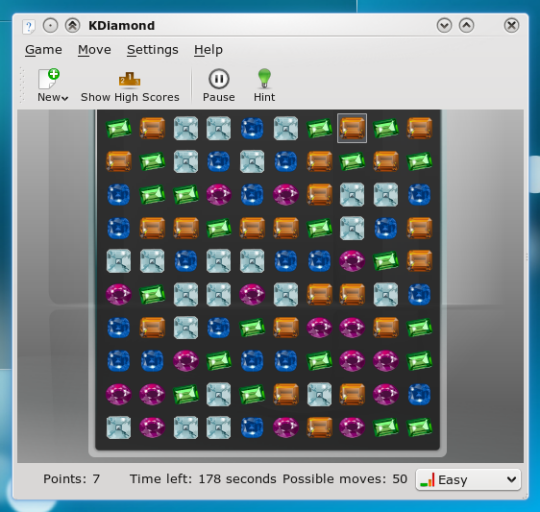 KDiamond is a clone of the famous games "Bejeweled"

Ksirk is a multi-player game of world domination. You can place armies all over the world, and use them to conquer your enemies. The new KSirk features improved graphics and network play. You can use Jabber to find an online game. There is a new skin editor which allows you to create new worlds to fight on. Using KDE-apps.org, you can share these with the world and give others the opportunity to download your creations using the KSirk build-in GNX installer.

In addition, KGoldRunner has seen the addition of a few new levels and themes, and KBlocks joins the ranks of KDE games with sound support.