The KDE Community today announced the immediate availability of "The Answer", (a.k.a KDE 4.2.0), readying the Free Desktop for end users. KDE 4.2 builds on the technology introduced with KDE 4.0 in January 2008. After the release of KDE 4.1, which was aimed at casual users, the KDE Community is now confident we have a compelling offering for the majority of end users.

See the Visual Guide To KDE 4.2 for the details on the innovations in 4.2 or read on for an overview. 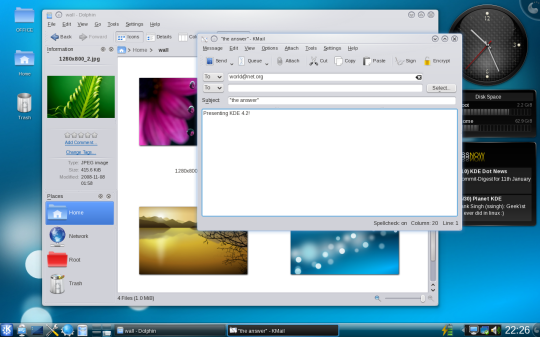 Moreover, support for several new languages have been added expanding the number of users for whom KDE is available in their native language by roughly 700 million people. Newly supported languages include are Arabic, Icelandic, Basque, Hebrew, Romanian, Tajik and several Indian languages (Bengali India, Gujarati, Kannada, Maithili, Marathi) indicating a rise in popularity in this part of Asia.
The Plasma desktop interface in KDE 4.2
Ogg Theora version

Packagers. Some Linux/UNIX OS vendors have kindly provided binary packages of KDE 4.2.0 for some versions of their distribution, and in other cases community volunteers have done so. Some of these binary packages are available for free download from KDE's http://download.kde.org. Additional binary packages, as well as updates to the packages now available, will become available over the coming weeks.

Package Locations. For a current list of available binary packages of which the KDE Project has been informed, please visit the KDE 4.2.0 Info Page.

Performance problems with the NVidia binary graphics driver have been resolved in the latest beta releases of the driver available from NVidia.

The complete source code for KDE 4.2.0 may be freely downloaded. Instructions on compiling and installing KDE 4.2.0 are available from the KDE 4.2.0 Info Page.

The KDE team encourages everybody to spread the word on the Social Web as well. Submit stories to websites, use channels like delicious, digg, reddit, twitter, identi.ca. Upload screenshots to services like Facebook, FlickR, ipernity and Picasa and post them to appropriate groups. Create screencast, upload them to YouTube, Blip.tv, Vimeo and others. Do not forget to tag uploaded material with the tag kde42 so it is easier for everybody to find the material, and for the KDE team to compile reports of coverage for the KDE 4.2 announcement. This is the first time the KDE team is attempting a coordinated effort to use social media for their messaging. Help us spreading the word, be part of it.

On web forums, inform people about KDE's new compelling features, help others getting started with their new desktop, help us spread information.