Today KDE released the second release candidate for its renewed Workspaces, Applications, and Development Platform. Meanwhile, the KDE release team has decided to schedule a third release candidate to allow for more testing, pushing the 4.10 releases into the first week of February 2013. Further testing and bug fixing will allow KDE to deliver rock-stable products to millions of users world wide. 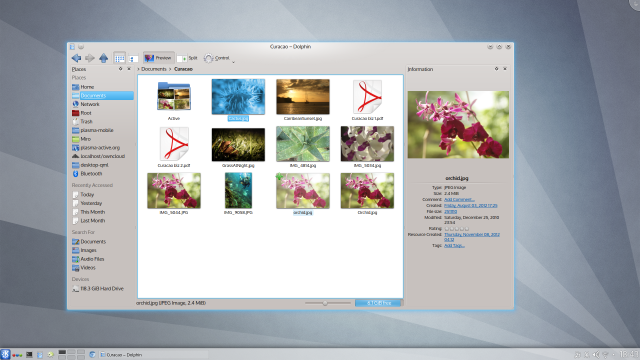 Highlights of 4.10 include, but are not limited to:

More improvements can be found in the 4.10 Feature Plan. As with any large number of changes, we need to give 4.10 a good testing in order to maintain and improve the quality and user experience when users install the update.

KDE is running an extra detailed beta-testing program throughout the 4.10 beta and RC releases. To participate, get the latest KDE 4.10. Instructions for installing the latest test release can be found here.

Some areas of KDE deserve extra testing attention this time around. We have checklists for testing in general, and recommendations for special attention on the wiki.

The KDE beta-testing program is a way for everyone to contribute to the ongoing quality of KDE software. You can make a difference by carefully testing the programs that are part of the KDE 4.10 beta and assist developers by identifying legitimate bugs. This means higher quality software, more features and happier users and developers.

Beta Testing Program is structured so that any KDE user can give back to KDE, regardless of their skill level. If you want to be part of this quality improvement program, please contact the Team on the IRC channel #kde-quality on freenode.net. The Team Leaders want to know ahead of time who is involved in order to coordinate all of the testing activities. They are also committed to having this project be fun and rewarding. After checking in, you can install the beta through your distribution package manager. The KDE Community wiki has instructions. This page will be updated as beta packages for other distributions become available. With the beta installed, you can proceed with testing. Please contact the Team on IRC #kde-quality if you need help getting started.

The KDE Software Compilation, including all its libraries and its applications, is available for free under Open Source licenses. KDE's software can be obtained in source and various binary formats from http://download.kde.org or with any of the major GNU/Linux and UNIX systems shipping today.

Packages. Some Linux/UNIX OS vendors have kindly provided binary packages of 4.10 RC2 (internally 4.9.97) for some versions of their distribution, and in other cases community volunteers have done so. Additional binary packages, as well as updates to the packages now available, may become available over the coming weeks.

Package Locations. For a current list of available binary packages of which the KDE Project has been informed, please visit the Community Wiki.

The complete source code for 4.10 RC2 may be freely downloaded. Instructions on compiling and installing 4.9.97 are available from the 4.9.97 Info Page.

KDE is a Free Software community that exists and grows only because of the help of many volunteers that donate their time and effort. KDE is always looking for new volunteers and contributions, whether it is help with coding, bug fixing or reporting, writing documentation, translations, promotion, money, etc. All contributions are gratefully appreciated and eagerly accepted. Please read through the Supporting KDE page for further information or become a KDE e.V. supporting member through our new Join the Game initiative.