The KDE Community today released KDE 4.1.0. This release is the second feature release of the KDE 4 series, sporting new applications and newly developed features on top of the Pillars of KDE4. KDE 4.1 is the first KDE4 release to contain the Personal Information Management suite KDE-PIM with its E-Mail client KMail, the planner KOrganizer, Akregator, the RSS feed reader, KNode, the newsgroup reader and many more components integrated into the Kontact shell. Furthermore, the new desktop shell Plasma, introduced in KDE 4.0, has matured to the point where it can replace the KDE 3 shell for most casual users. Like with our previous release much time has been devoted to improving the framework and underlying libraries on which KDE is built.
Dirk Müller, one of KDE's release managers gives numbers: "There have been 20803 commits made from KDE 4.0 to KDE 4.1 along with 15432 translation checkins. Almost 35000 commits have been done in work branches, some of them also being merged into KDE 4.1, so those were not even counted." Müller also tells us that KDE's sysadmin team has created 166 new accounts for developers on KDE's SVN server. 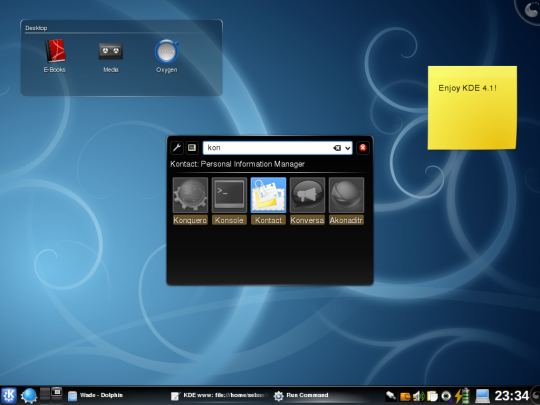 The key improvements in KDE 4.1 are:

The KDE community dedicates this release to Uwe Thiem, a long-time contributor to KDE who passed away recently after a sudden kidney failure. The death of Uwe came totally unexpected and as a shock to his fellow contributors. Uwe has, quite literally until the last days of his life contributed to KDE, not only in the form of programming. Uwe also played an important role in educating users in Africa about Free Software. With Uwe's sudden death, KDE has lost an invaluable part of its community and a friend. Our thoughts are with his family and the ones he left behind.

Past, present and future

While KDE 4.1 aims at being the first release suitable for early adopting users, some features you are used to in KDE 3.5 are not implemented yet. The KDE team is working on those and strives to make them available in one of the next releases. While there is no guarantee that every single feature from KDE 3.5 will be implemented, KDE 4.1 already provides a powerful and feature-rich working environment.
Note that some options in the UI have moved to a place in the context of the data they manipulate, so make sure you have a closer look before you report anything missing in action.
KDE 4.1 is a huge step forward in the KDE4 series and hopefully sets the pace for future development. KDE 4.2 can be expected in January 2009. 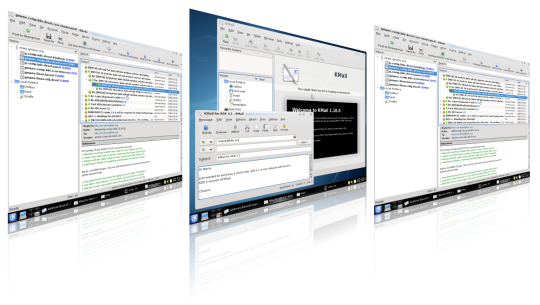 KDE PIM is back

While stabilising the new frameworks in KDE 4.1, more emphasis has shifted towards end user visible parts. Read on for a list of improvements in KDE 4.1. More complete information can be found on the KDE 4.1 Release Goals page and in the more verbose 4.1 Feature Plan.

Answers to common questions have been collected in the KDE4 End User FAQ. The Glossary is also a good read if you want to learn more about KDE4. 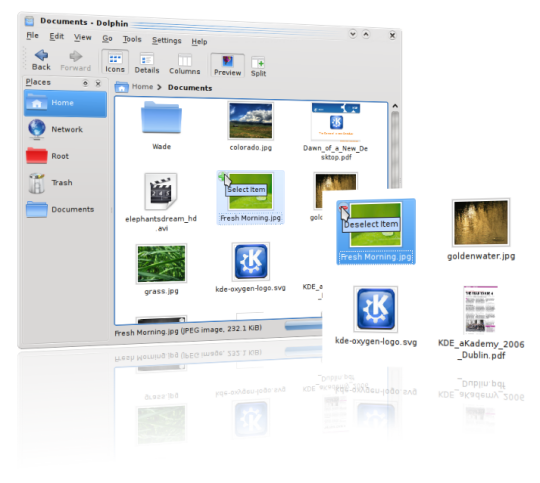 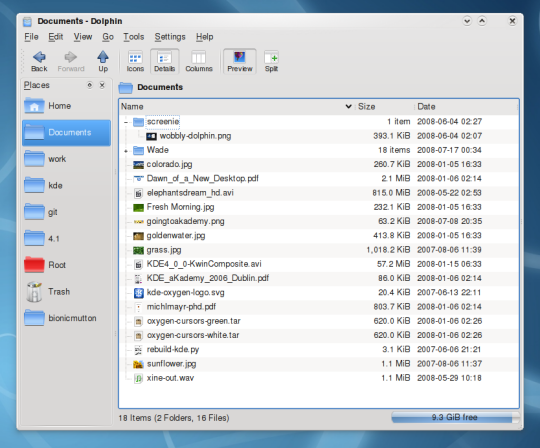 Dolphin's new treeview gives you quicker access across directories. Note that it's disabled in the default setting. 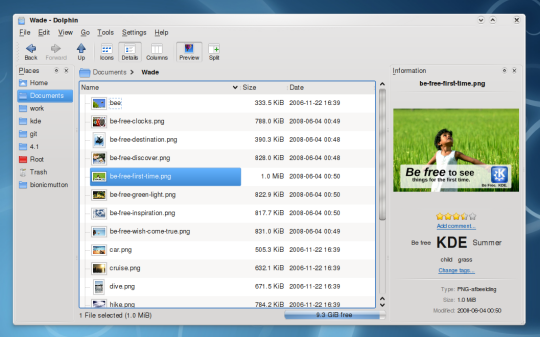 Nepomuk provides tagging and rating in KDE -- and thus in Dolphin. 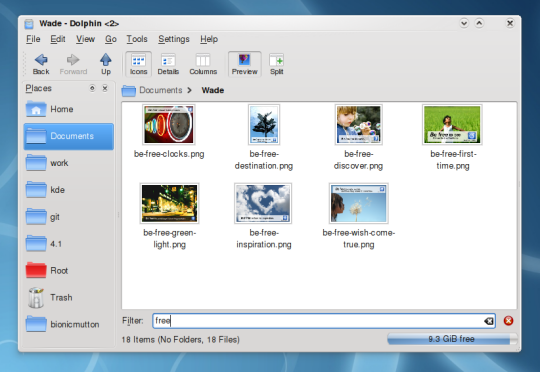 Find your files easier with the filter bar. 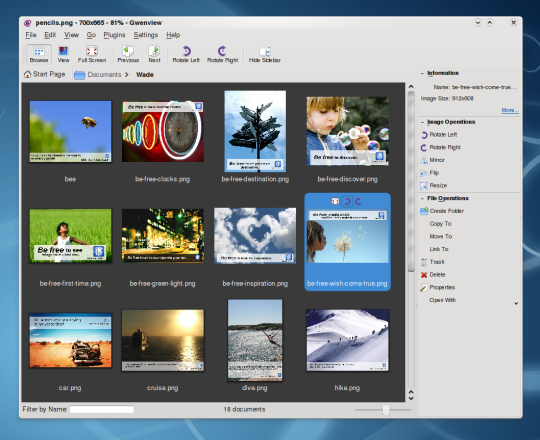 You can browse directories with images with Gwenview. Hover actions put common tasks at your fingertips. 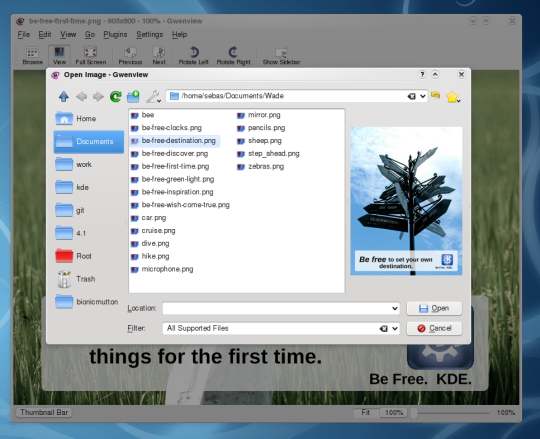 Opening files from your harddisk or the network is just as easy, thanks to KDE's infrastructure. 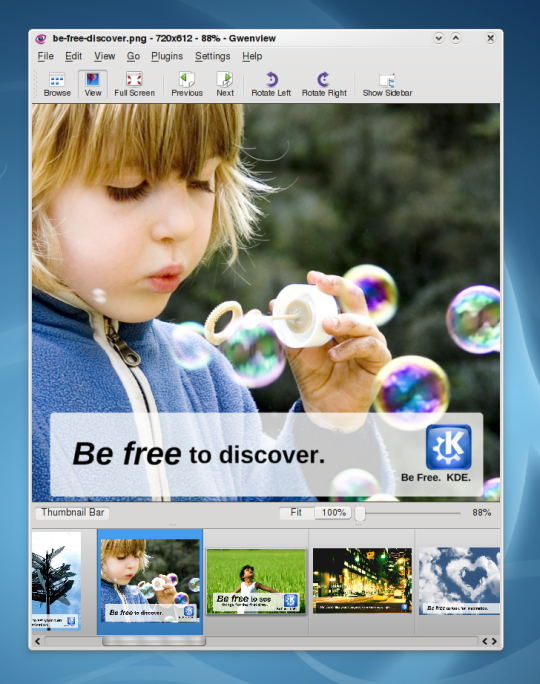 The new thumbnail bar lets you switch between images easily. It is also available in full screen mode. 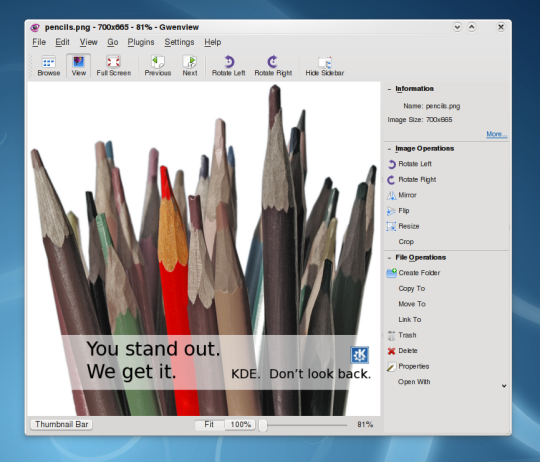 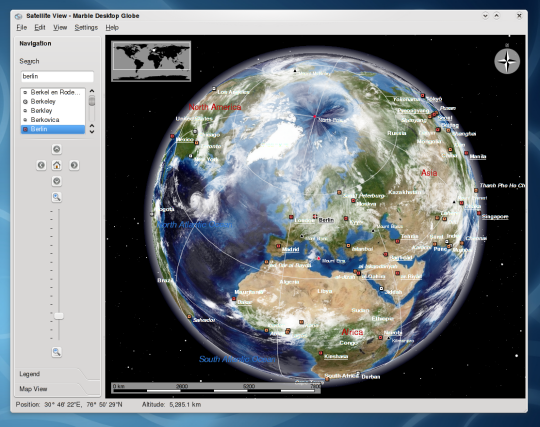 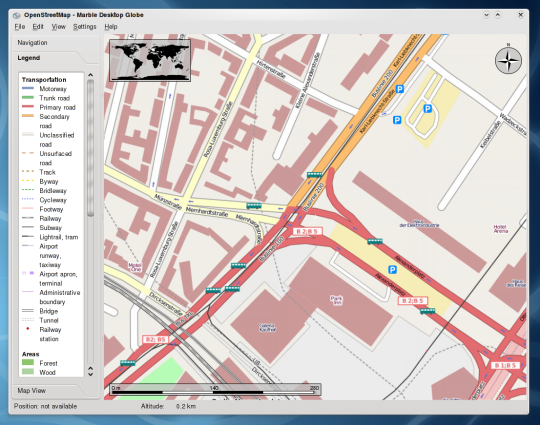 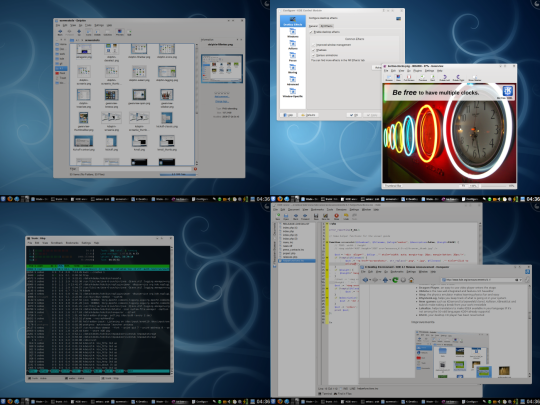 KWin's desktopgrid visualizes the concept of virtual desktops and makes it easier to remember where you left that window you're looking for. 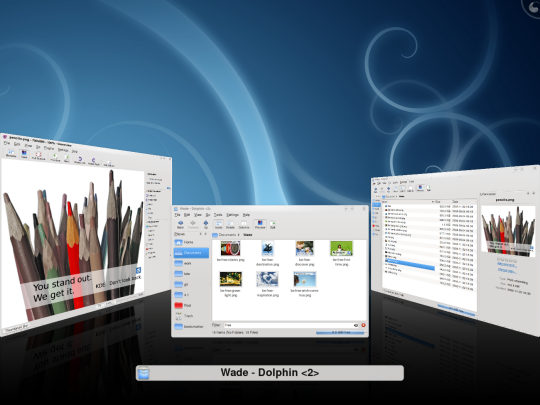 The Coverswitcher makes switching applications with Alt+Tab a real eye-catcher. You can choose it in KWin's desktop effects settings. 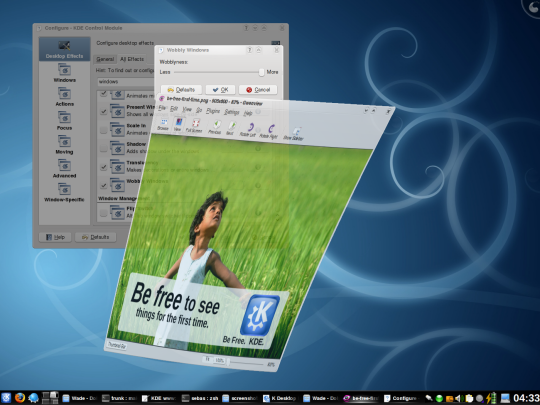 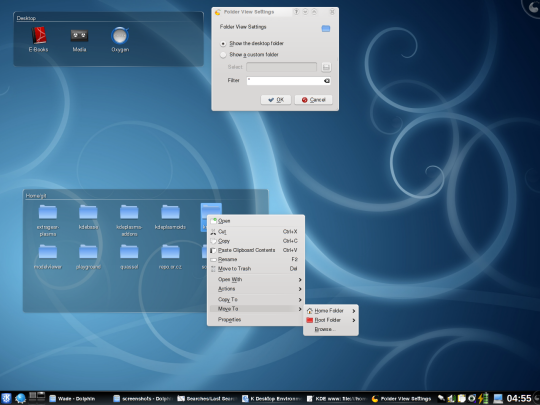 The new folderview applet lets you display the content of arbitrary directories on your desktop. Drop a directory onto your unlocked desktop to create a new folderview. A folderview can not only display local directories, but can also cope with locations on the network.

The new panel controller lets you easily resize and reposition panels. You can also change the position of applets on the panel by dragging them to their new position.

With KRunner, you can start applications, directly email your friends and accomplish various other small tasks. 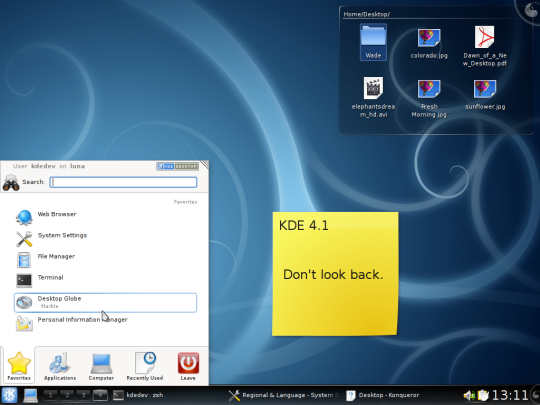 Plasma's Kickoff application launcher has had a facelift. 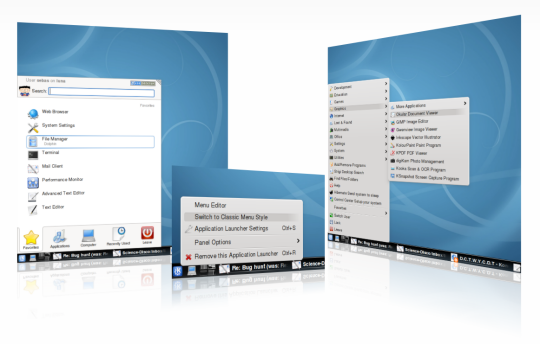 You can choose between the Kickoff application launcher and the classic menu style.

The release of KDE 4.1.0 has had a warm reception in the press. We've collected an overview of articles and reviews, some also giving additional information you might be looking for. Read more one the "In the Press" page.

Source Code. The complete source code for KDE 4.1.0 may be freely downloaded. Instructions on compiling and installing KDE 4.1.0 are available from the KDE 4.1.0 Info Page, or on TechBase.