The KDE Community is proud to announce the second beta release of KDE 4.1. Beta 2 is aimed at testers, community members and enthusiasts in order to identify bugs and regressions, so that 4.1 can fully replace KDE 3 for end users. KDE 4.1 beta 2 is available as binary packages for a wide range of platforms, and as source packages. KDE 4.1 is due for final release in late July 2008.

After one month has passed since the feature freeze on the KDE 4.1 branch, the KDE hackers have been working on polishing the new features, desktop integration, and documenting and translating the packages. Several bugfixing sessions have been held and squashed bugs in the beta software. While there are still bugs left that need to be fixed until the release, KDE 4.1 Beta2 shapes up nicely. Testing and feedback on this release is appreciated and needed to make KDE 4.1 a splash. 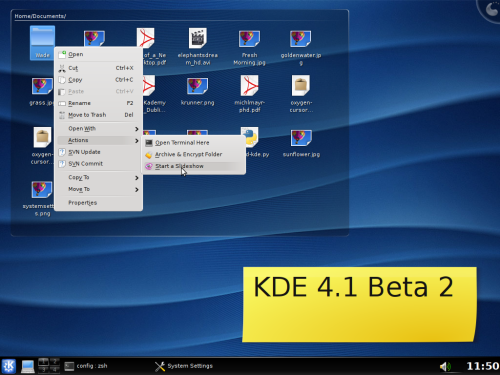 A more complete list of new features in KDE 4.1 is up on Techbase.

While most KDE 4.1 applications are written in C++, language bindings expose the functionality of the KDE libraries to application developers that prefer a different language. KDE 4.1 comes with support for several other languages, such as Python and Ruby. The printer applet that has been added in KDE 4.1 is written in Python, fully transparent to the user. 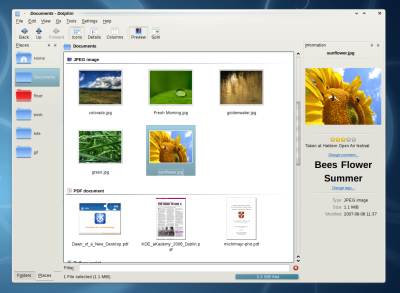 The Semantic Desktop with its tagging system

The first bits and pieces of the NEPOMUK Social

Semantic Desktop are becoming visible and more widely applicable. Support for tagging in Dolphin shows first features coming from this technology, which is developed in a European Research programme. 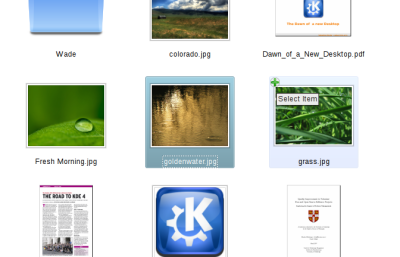 Selecting files is made easier by

a small + button in the top left corner that selects the file, rather than opens it. This change makes using the filemanager in single-click mode much easier and prevent accidentally opening files, while being intuitive and easy to use. 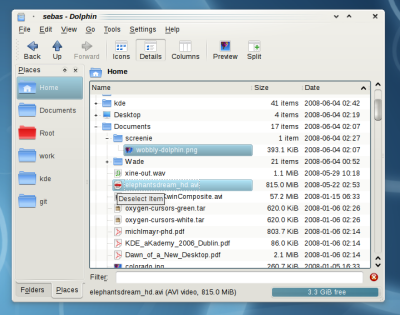 Many users have asked for a treeview mode in the detailed list mode. The

feature has been edited and makes combined with the single click improvments for quick moving and copying of files.

Gwenview's KDE4's default image viewer has been polished further as well. Options such as the rotate and fullscreen view functions have been put into the direct context of the image, making the application's user interface less cluttered, minimizing mouse movements and thus making the application more intuitive and easy to use. A 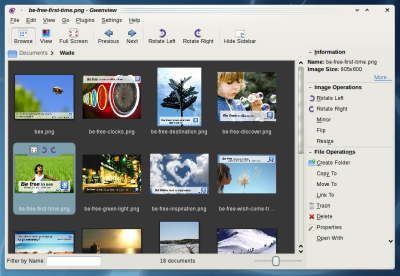 Gwenview's overview of a directory 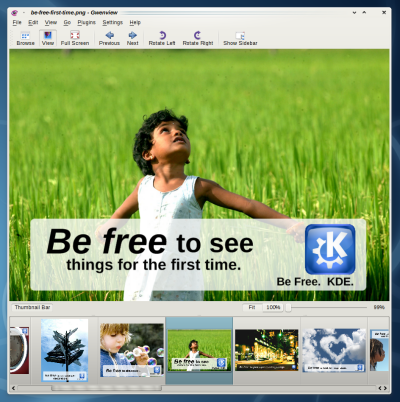 KDE 4.1 is scheduled for final release on July 29, 2008. This time based release falls six months after the release of KDE 4.0.

Community volunteers and Linux/UNIX OS vendors have kindly provided binary packages of KDE 4.0.83 (Beta 2) for most Linux distributions, and Mac OS X and Windows. Be aware that these packages are not considered ready for production use. Check your operating system's software management system.

Source Code. The complete source code for KDE 4.0.83 may be freely downloaded. Instructions on compiling and installing KDE 4.0.83 are available from the KDE 4.0.83 Info Page, or on TechBase.

KDE is a Free Software project that exists and grows only because of the help of many volunteers that donate their time and effort. KDE is always looking for new volunteers and contributions, whether it is help with coding, bug fixing or reporting, writing documentation, translations, promotion, money, etc. All contributions are gratefully appreciated and eagerly accepted. Please read through the Supporting KDE page for further information.

We look forward to hearing from you soon!

KDE 4 is the innovative Free Software desktop containing lots of applications for every day use as well as for specific purposes. Plasma is a new desktop shell developed for KDE 4, providing an intuitive interface to interact with the desktop and applications. The Konqueror web browser integrates the web with the desktop. The Dolphin file manager, the Okular document reader and the System Settings control center complete the basic desktop set.
KDE is built on the KDE Libraries which provide easy access to resources on the network by means of KIO and advanced visual capabilities through Qt4. Phonon and Solid, which are also part of the KDE Libraries add a multimedia framework and better hardware integration to all KDE applications.