The KDE Project is proud to announce the first beta release of KDE 4.1. Beta 1 is aimed at testers, community members and enthusiasts in order to identify bugs and regressions, so that 4.1 can fully replace KDE 3 for end users. KDE 4.1 beta 1 is available as binary packages for a wide range of platforms, and as source packages. KDE 4.1 is due for final release in July 2008.

Plasma, the innovative new system that creates the menus and panels that make up a desktop, is maturing rapidly. It now supports multiple and resizeable panels allowing users to compose their desktop as flexibly as before. The application launcher menu, Kickoff, has been comprehensively polished with a clean new look and many optimisations. An overhauled Run Command dialog allows power users to quickly launch applications, open documents and visit sites. Performance gains in composited window management provide better ergonomics and eye candy, including a Cover Switch alt-tab feature and the mandatory wobbly windows effect. 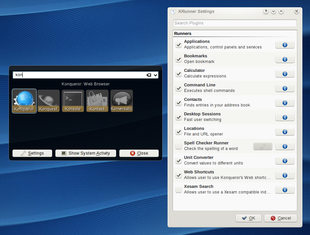 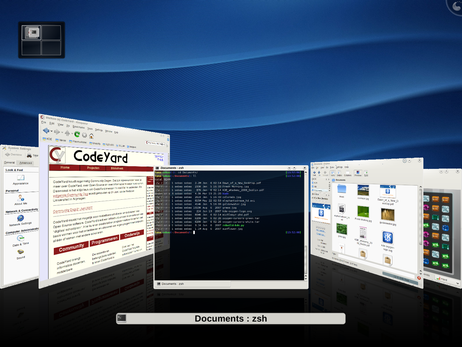 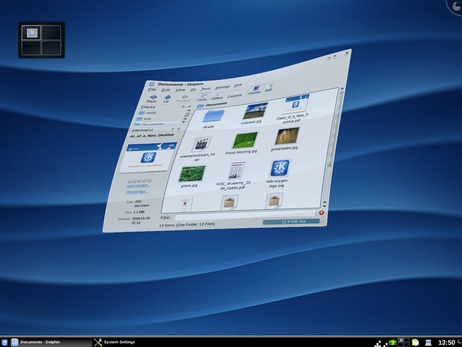 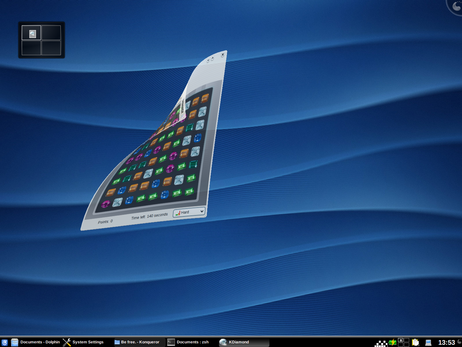 Kontact, the KDE personal information manager, and its associated tools have been ported to KDE 4 and will be released for the first time with KDE 4.1. Many features from the KDE 3 Enterprise Branch have been incorporated, making Kontact more useful in business settings. Improvements include new components such as KTimeTracker and the KJots note-taking component, a smooth new look, better support for multiple calendars and timezones and more robust email handling. 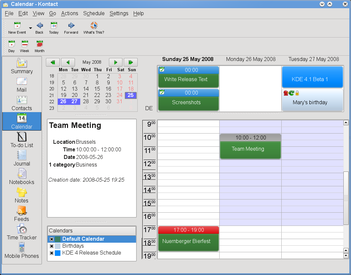 Multiple calendars in use 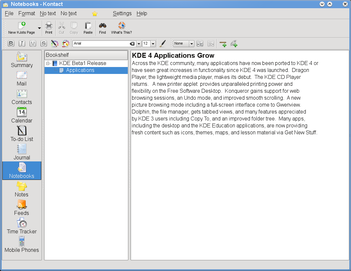 Across the KDE community, many applications have now been ported to KDE 4 or have seen great increases in functionality since KDE 4 was launched. Dragon Player, the lightweight media player, makes its debut. The KDE CD Player returns. A new printer applet provides unparalleled printing power and flexibility on the Free Software Desktop. Konqueror gains support for web browsing sessions, an Undo mode, and improved smooth scrolling. A new picture browsing mode including a full-screen interface come to Gwenview. Dolphin, the file manager, gets tabbed views, and many features appreciated by KDE 3 users including Copy To, and an improved folder tree. Many apps, including the desktop and the KDE Education applications, are now providing fresh content such as icons, themes, maps, and lesson material via Get New Stuff, which has an improved interface. Zeroconf networking has been added to several games and utilities, taking the pain out of setting up games and remote access. 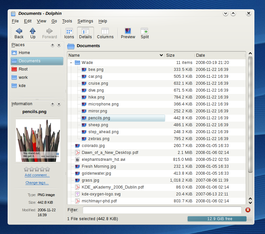 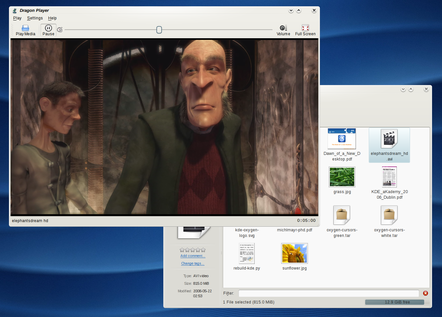 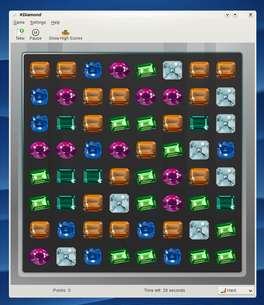 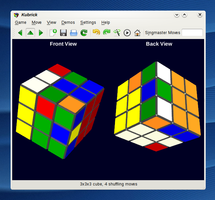 The 80s on your desktop 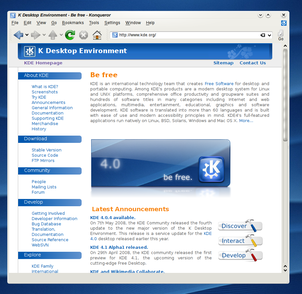 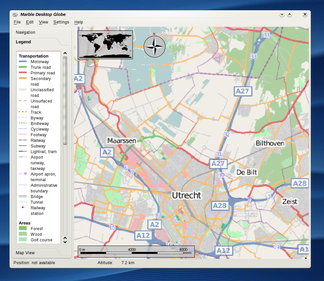 Refinement Throughout The Frameworks

Developers have been busy enriching the core KDE libraries and infrastructure too. KHTML gets a speed boost from anticipatory resource loading, while WebKit, its offspring, is added to Plasma to allow OSX Dashboard widgets to be used in KDE. The use of the Widgets on Canvas feature of Qt 4.4 makes Plasma more stable and lightweight. KDE's characteristic single-click based interface gets a new selection mechanism that promises speed and accessibility. Phonon, the crossplatform media framework, gains subtitle support and GStreamer, DirectShow 9 and QuickTime backends. The network management layer is extended to support several versions of NetworkManager. And recognising that the Free Desktop values diversity, cross desktop efforts begin, such as supporting the popup notification specifications and the freedesktop.org desktop bookmark specification, so that other desktops' applications can fit right into a KDE 4.1 session.

KDE 4.1 is scheduled for final release on July 29, 2008. This time based release falls six months after the release of KDE 4.0.

Community volunteers and Linux/UNIX OS vendors have kindly provided binary packages of KDE 4.0.80 (Beta 1) for most Linux distributions, and Mac OS X and Windows. Be aware that these packages are not considered ready for production use. Check your distribution's software management system or for distribution specific instructions see the following links:

Source Code. The complete source code for KDE 4.0.80 may be freely downloaded. Instructions on compiling and installing KDE 4.0.80 are available from the KDE 4.0.80 Info Page, or on TechBase.

KDE is a Free Software project that exists and grows only because of the help of many volunteers that donate their time and effort. KDE is always looking for new volunteers and contributions, whether it is help with coding, bug fixing or reporting, writing documentation, translations, promotion, money, etc. All contributions are gratefully appreciated and eagerly accepted. Please read through the Supporting KDE page for further information.

We look forward to hearing from you soon!

KDE 4 is the innovative Free Software desktop containing lots of applications for every day use as well as for specific purposes. Plasma is a new desktop shell developed for KDE 4, providing an intuitive interface to interact with the desktop and applications. The Konqueror web browser integrates the web with the desktop. The Dolphin file manager, the Okular document reader and the System Settings control center complete the basic desktop set.
KDE is built on the KDE Libraries which provide easy access to resources on the network by means of KIO and advanced visual capabilities through Qt4. Phonon and Solid, which are also part of the KDE Libraries add a multimedia framework and better hardware integration to all KDE applications.