With the fourth major version, the KDE Community marks the beginning of the KDE 4 era.

The KDE Community is thrilled to announce the immediate availability of KDE 4.0. This significant release marks both the end of the long and intensive development cycle leading up to KDE 4.0 and the beginning of the KDE 4 era. 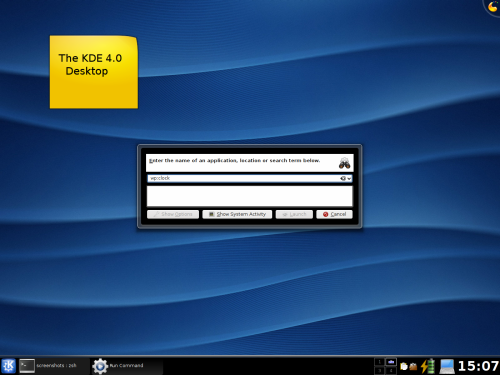 The KDE 4 Desktop has gained some major new capabilities. The Plasma desktop shell offers a new desktop interface, including panel, menu and widgets on the desktop as well as a dashboard function. KWin, the KDE Window manager, now supports advanced graphical effects to ease interaction with your windows.

Lots of KDE Applications have seen improvements as well. Visual updates through vector-based artwork, changes in the underlying libraries, user interface enhancements, new features, even new applications -- you name it, KDE 4.0 has it. Okular, the new document viewer and Dolphin, the new file manager are only two applications that leverage KDE 4.0's new technologies.

The Oxygen Artwork team provides a breath of fresh air on the desktop. Nearly all the user-visible parts of the KDE desktop and applications have been given a facelift. Beauty and consistency are two of the basic concepts behind Oxygen.

Some applications are introduced in more detail in the KDE 4.0 Visual Guide. 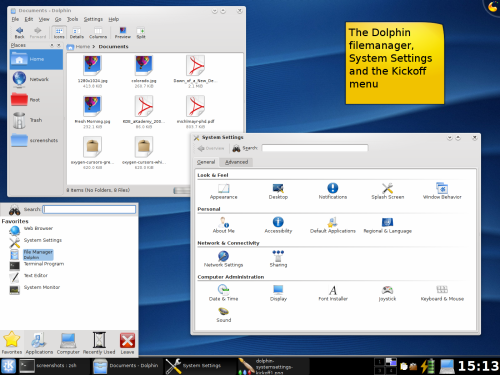 The KDE 4.0 Visual Guide provides a quick overview of various new and improved KDE 4.0 technologies. Illustrated with many screenshots, it walks you through the different parts of KDE 4.0 and shows some of the exciting new technologies and improvements for the user. New features of the desktop get you started, applications such as System Settings, Okular the document viewer and Dolphin the file manager are introduced. Educational applications are shown as well as Games.

For those interested in getting packages to test and contribute, several distributions have notified us that they will have KDE 4.0 packages available at or soon after the release. The complete and current list can be found on the KDE 4.0 Info Page, where you can also find links to the source code, information about compiling, security and other issues.

The following distributions have notified us of the availability of packages or Live CDs for KDE 4.0:

KDE 4.0 is the innovative Free Software desktop containing lots of applications for every day use as well as for specific purposes. Plasma is a new desktop shell developed for KDE 4, providing an intuitive interface to interact with the desktop and applications. The Konqueror web browser integrates the web with the desktop. The Dolphin file manager, the Okular document reader and the System Settings control center complete the basic desktop set.
KDE is built on the KDE Libraries which provide easy access to resources on the network by means of KIO and advanced visual capabilities through Qt4. Phonon and Solid, which are also part of the KDE Libraries add a multimedia framework and better hardware integration to all KDE applications.