KDE 4.0 Beta 1 marks the stabilizing of foundations for the new major release of KDE.

The KDE Community is happy to announce the immediate availability of the first Beta release for KDE 4.0. This release marks the beginning of the integration process which will bring the powerful new technologies included in the now frozen KDE 4 libraries to the applications.

Almost two months after the foundations of KDE 4 have been laid with the first alpha, KDE enters the stage of a full freeze of the library interface. From now on, the applications will focus on integrating the new technology refined during the last months, and the library developers will try to fix all bugs found during this process. No new applications will enter the official KDE modules and usability and accessibility work is of course an ongoing process. In the following weeks KDE developers will be able to add features to their applications until the next beta is released and the application features will be frozen as well.

At this moment, the codebase is still moving quickly. The new foundations are stabilizing, but applications are still in flux. Since the last Alpha, a lot of work has been committed. We've seen improvements all over KDE again. In the following sections we will try to highlight a few of them.

Marble is an application showing a spherical earth which you can zoom and rotate. Marble is a geographical application and widget and it is compatible with Google Earth's KMZ files), but more lightweight. Marble uses Wikipedia for retrieval of geographical data and offers easy downloading of new maps, views and other data. Inspite of using a combination of vector and bitmap data, it is not slow, even without hardware accelleration in the form of OpenGL. Google sponsors three students working on Marble through their Summer of Code project.
Marble also doubles as a generic geographical map widget and framework. It will allow developers to easily show a person's location or let the user choose a timezone by embedding it into their application. Of course, the educational applications and the games will make use of this.

On July the 20th, the Icon/ Pixmap Cache was merged by Rivo Laks into the KDE libraries. The icon cache speeds up loading icons when starting applications, and in the future, it might contribute to performance when using fully scalable icons and other scalable interface elements. The pixmap cache makes caching of images rendered by the application, such as from SVG files, easy for application developers. The result will be improved startup and (to a lesser extent) runtime performance, already seen in the games KMines and KLines.

Slowly, the many changes to the foundation of KDE are starting to become visible to the users. Applications are starting to capitalize on the new architecture, while adding features and other improvements.

Since the previous report on KWin, the KDE window manager, a lot progress has been made. Most work has gone into new and improved effects and their configuration dialogs. Users of low-end hardware aren't forgotten, as KWin will now automatically fallback to XRENDER or even disable compositing in the absence of OpenGL rendering.
Further, Integration between Dolphin the filemanager in KDE and Konqueror, KDE's webbrowser has been improved, and Gwenview, the image viewer received usability work and features. 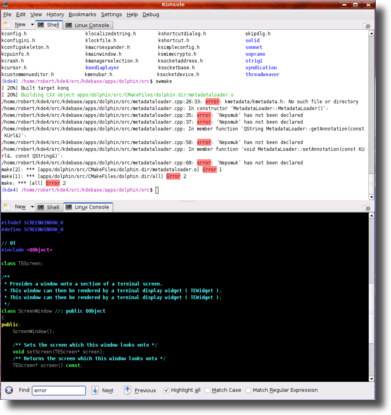 In addition to lots of user interface cleanups and improvements, Konsole has improved automatic tab titles, support for random background colors per-tab, clickable URLs and a new default color scheme. Konsole now also provides hints to the terminal about the color scheme being used to allow programs such as Vim to adapt their palette accordingly, improving readability for the user. 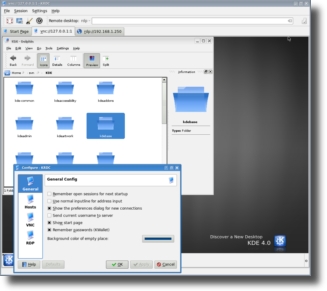 The improved KRDC in action

System administrators will be happy to hear KRDC, our remote desktop tool, has been adopted by Urs Wolfer. He is rewriting KRDC, solving many longstanding issues and adding features like tabbed view and KWallet support. Work in KDE-PIM is picking up, as features from the KDE-PIM Enterprise branch are merged. KOrganizer received a gantt-based time line view and an Outlook-style view, and KMail incorporated the tagging patches.

More effort went in KOrganizer's theming interface by Loïc Corbasson, who is extending the theming and plugin interface and writing some example plugins like a Wikipedia 'this day in history' one.

Now the KDE libraries are rather stable, the development focus is shifting to finishing other components of the desktop. One of the most notable components is Plasma. While the developers are pretty much ready with the infrastructure for the plasmoids, most of them are not yet shipped by default Development of those features is happening in KDE's source code repository in the playground module. Thus, you will still see good old Kicker, KDE's panel and taskbar when you boot up KDE 4.0 Beta 1.
Javascript support has been added to plasma, and according to its lead developer we might soon support the Mac OS X Dashboard widgets. Superkaramba applets are supported already, Opera widgets might follow soon.

Extragear applications like DigiKam and KPhotoalbum are busy porting to KDE 4, and we encourage all application authors who haven't started this yet to get going with the porting guide.

For those interested in getting packages to test and contribute, several distributions notified us that they will have KDE 4.0 Beta 1 packages available at or soon after the release. The complete and current list can be found on the KDE 4.0 Beta1 Info Page.

Along with KDE 4.0 Beta 1, KOffice releases its second alpha version. This version is released as a technology preview to let the public catch a gleam of what is coming in KOffice version 2.0. It does not have the same level of maturity as the rest of KDE 4.0 Beta 1. 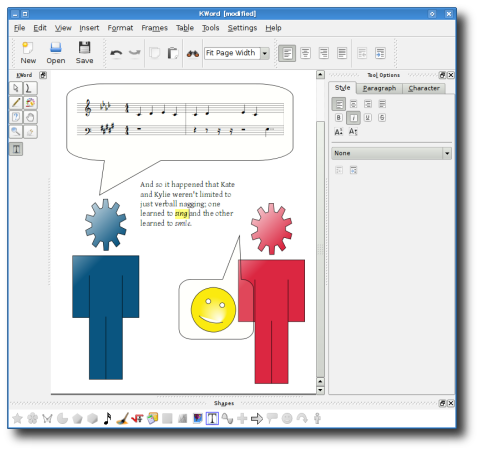 The infrastructural changes are enormous. KOffice version 2 series will take full advantage of the improved Qt 4, giving it new features like text directionality and improved layouting. The text rendering is also much improved, giving it a professional quality text layout if the fonts support it.

The core of the new improvements is the revolutionary Flake library which will allow KOffice to use any shape in any application. A Flake shape can be something as simple as a circle or something as complex as a complete spreadsheet. It is also extremely simple to create new shapes, something that is demonstrated by the Google-sponsored Summer of Code project Music Notation flake, in which a student creates a music notation plugin in just 6 weeks.

Although KOffice is included in KDE 4.0 Beta 1, it has its own release cycle, and the first version of the KOffice version 2 series is expected around the new year 2007-2008