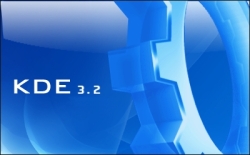 The KDE Project is pleased to announce the immediate availability of KDE 3.2, the third major release of the award-winning KDE3 desktop platform. KDE 3.2 is the result of a combined year-long effort by hundreds of individuals and corporations from around the globe. This diverse team has been working successfully together since 1997 to make KDE the leading Open Source desktop software for Linux and UNIX.

As with previous KDE releases, version 3.2 provides an integrated desktop and a comprehensive set of applications that combine to create an environment that is usable for a wide variety of tasks right out of the box. In addition to the many new applications making their debut in KDE 3.2, the veteran applications have been refined and augmented generously. By installing some or all of these applications common desktop tasks such as web browsing, file management, email, personal information management, instant messaging, software and web development, multimedia, education and entertainment can be accomplished quickly and easily. This impressive collection of software is complemented by a recent update to the KOffice integrated office suite.

Reflecting its international team and focus, KDE 3.2 is currently available in 42 different languages. Partial translations into 32 other languages are also available, many of which are expected to be completed during the KDE 3.2 life cycle. With 74 different languages and full localization support, no other desktop is as ready to serve the needs of today's global community.

KDE 3.2 also provides improvements in usability and performance. Noticeable speed boosts in application start up times and webpage rendering together with many interface refinements make KDE 3.2 the most usable and performant KDE ever. Attention was also paid to ensuring that KDE is accessible to those with disabilities. Several accessibility related applications are included with 3.2 and work on integrating accessibility technologies directly into KDE's foundations is ongoing.

KDE has earned a reputation for quality and a comprehensive feature set among its global user base that is estimated to number in the millions. KDE is also proud to be the default user interface for several operating systems including Ark Linux, Conectiva, Knoppix, Lindows, Lycoris, Mandrake Linux, SUSE Linux, TurboLinux and Xandros. KDE is also available as a part of Debian, Free/Open/NetBSD, Gentoo, Libranet, Red Hat Linux, Slackware and Solaris, among others. In addition to these operating system vendors, more and more companies are offering commercial support for KDE, some of which are listed in the business directory of the KDE::Enterprise website. With the release of KDE 3.2, the KDE Project looks to enhance and grow this ecosystem of users and supporters.

Highlights At A Glance

Some of the highlights in KDE 3.2 are listed below. .

For a more detailed list of improvements since the KDE 3.1 release, please refer to the KDE 3.2 Changelog.

KDE 3.2 can be downloaded over the Internet by visiting download.kde.org. Source code and vendor supplied and supported binary packages are available. KDE 3.2 will also be featured in upcoming releases of various Linux and UNIX operating systems and can be purchased separately on CD-ROM. For additional information on package availability and to read further release notes, please visit the KDE 3.2 information page.

KDE is available at no cost and all source code, art and documentation is freely available under Open Source licenses. Additional third-party KDE applications can be downloaded from kde-apps.org. KDE 3.2 is also compatible with other Linux and UNIX software packages including popular Open Source applications such as Open Office and the Mozilla web browser.

KDE is supported through voluntary contributions of time, money and resources by individuals and companies from around the world. To discover how you or your company can join in and help support KDE please visit the Supporting KDE web page. There may be more ways to support KDE than you imagine, and every bit of support helps make KDE a better project and a better product for everyone. Communicate your support today with a monetary donation, new hardware or a few hours of your time!

Want to explore KDE 3.2 further while waiting for your download to complete? Discover what's new in 3.2, learn about the community that is responsible for KDE and find out what KDE has to offer you as a user or a developer by following the links below.